Far Away From the Comforts of Home

Well, I've had another English adventure today, but not one that I particularly wanted to have--the National Health Service. That's right, I've been sick. So this morning, when my throat was so sore it made me cry (literally), I decided it might be time to see a doctor. He confirmed that I am in fact sick, and then proceeded to tell me there was really nothing he could do for my throat beyond giving me a spray that will numb it long enough for me to eat.
I hate being sick in a different country. It makes me feel so small and far away from home. Everything seems even more unfamiliar and foreign and what I'm wanting right now is familiarity (and a cough lozenge that isn't black currant flavored).
Posted by Barbi at 11:15 AM No comments:

I can say I've been to Stonehenge now. It's smaller than I thought it would be, but it's 4500 years old, so who cares how small it is; it's 4500 years old. How many of us can say we've seen man made structures that were made four millenia ago? Probably not many. In Texas, there aren't many buildings more than 200 years old. It pales in comparison to millenia.
Anyway, you get the picture. Stonehenge is really old, and it's a huge tourist trap. There were people everywhere. In the movies you always see it as some solitary figure on the Salisbury plain with absolutely nothing around it. You don't see the gift shop (which includes such wares as a Stonehenge Rocks t-shirt, Stonehenge Socks, and the ever popular Stonehenge decorative spoons. I totally bought the Stonehenge socks, and I'll sport them proudly), the large car park, and snack bar. 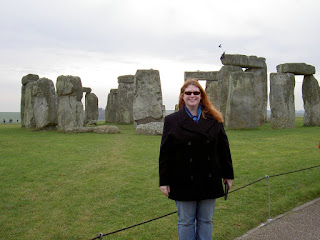 Then we moved onto Salisbury, site of the Salisbury Cathedral. It's 800 years old and possesses one of the four original copies of the Magna Carta, which is also about 800 years old. The cathedral is absolutely awe-inspiring. It's massive and it sports one of the tallest church spires in the United Kingdom. And I was lucky enough to climb to the top of the spire because we roped a guide into taking us up to the top. I climbed a lot of really tiny spiral staircases. It's a miracle I didn't trip and fall. And I saw some thirteenth century wood and two hundred year old graffitti. It was pretty awesome. But when we got to the top and went outside on the balcony, the view was breath-taking. That's all I need to say. The view speaks for itself. 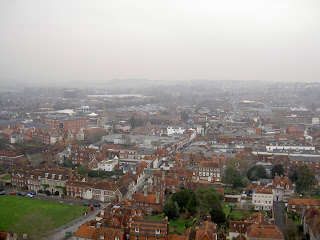 A little bit of culture

I travelled to London on Thursday to see Patrick Stewart perform in Antony and Cleopatra. It was one of those Oh my God moments. He was amazing, and I don't just say that because I'm a huge trekkie. I did have a trekkie moment at the beginning of the play when I marvelled at being in the same room as the man who played Captain Picard. I mean I couldn't divorce myself completely, I've loved Star Trek for way too long. It really was a dream come true for me to see him perform.

Everyone in the play was incredible though, so--no suprise--it was a production of the Royal Shakespeare Company. Antony and Cleopatra is part of the Complete Works festival they've been holding for the last year (I bet their staging of Titus Andronicus was really cool). I've been gushing about this for the past three days. I can't say enough how amazing it was, as anyone I've talked to since Thursday has seen full well. It is by far, my favorite England experience.

And who am I kidding--it wouldn't have been nearly as exciting without Patrick Stewart. I'm such a trekkie nerd. I'm going next month to see him as Prospero in The Tempest. We're also travelling to Stratford to see Ian Mckellan as King Lear. I bet that will be a really really great performance.

It's Bath! Aren't you Excited?

Well you should be excited. I went camera crazy in Bath. I took 116 pictures, so if you'd like to relive the entire experience in minute detail, I'll be happy to show you all 116 of them when I get back to the states. Here's a few, and I'm going to post as many as I can on flickr. Here's the link if you want to see more pics--I did manage to take quite a few really good ones as well : http://www.flickr.com/photos/barbi7/

First we went to the Roman Baths. Looking back at my pictures, I seemed to have been fascinated with odd bits of brick. It probably had some sort of significance when I was actually taking the picture, but what that was is lost to me now. The water actually bubbles--apparently it's some reaction to underground gas or something like that. There I am in my requisite red coat at the Baths--every picture from England that I've been in I've been wearing that red coat. I'll be really glad when it's warm and I don't have to wear it any more. 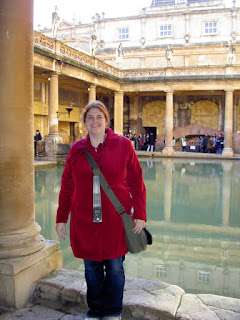 Next, we went to the Bath Abbey. We were particularly happy to go there because it was free, although I did leave a small donation to help with the church's upkeep. Besides, the volunteer at the front desk was really the nicest man. There are tombs and memorial plaques everywhere, and I saw one dated as early as 1683. It was cool just to bask in the historical oldness of it all. 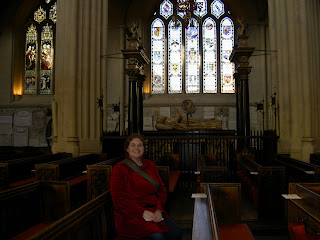 Here's a picture of the Abbey I took right before we left to return to Leicester, one of my better efforts if I do say so myself. We went to an evensong service that evening, and it was really beautiful--very calming and majestic. I wish you all could have heard it. 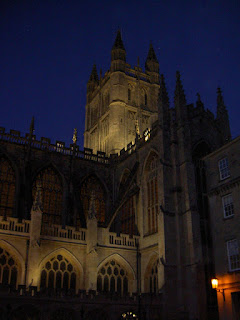 Of course, we had to take a tea break and where better than a place with a clever name--they serve really good tea too. So if you're ever in Bath, and you want a pot of tea, I recommend the house blend. Yummy. 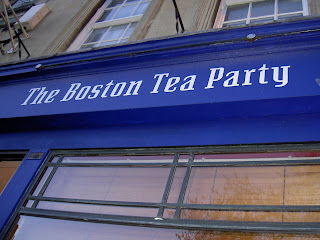 And just because I had to throw in something really weird--and there's not much stranger than two men on really tall unicycles wearing hot pink tutus and holding torches (they juggled those torches as their big finale). This street show was truly one of the high points of my trip to Bath. I haven't laughed that much in a really long time. 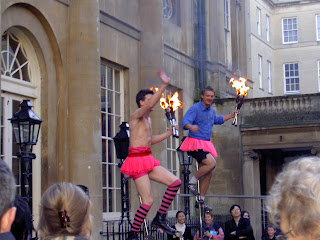 Ramble Through the Leicester City Centre

I went out on Thursday afternoon to run a few errands, and the whole enterprise turned into a lovely wander around the city centre. Tucked behind an alley way and next to the Corn Exchange, I found a large open air market, selling everything from fruits and vegetables, clothes, music, knick knacks, and cell phones. I even found a booth that sold things for pets, which really made me miss Rocky. 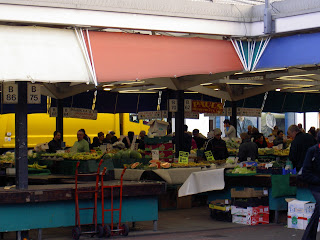 After the Farmer's Market, I wandered through a small alleyway and found a place called (love the name) tucked away from the rest of the city. 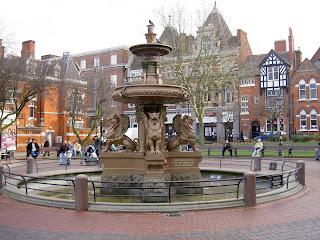 I love when I find great places while wandering aimlessly. I'm going back next week to see what I can find.
Posted by Barbi at 4:37 AM No comments:

I took a break from reading just now, and I walked to the nearest residence hall bar to buy a candy bar. On the way back to the hall, I see four guys emerge from the hall across from mine carrying another guy, wrapped from head to toe in toilet paper. His feet were the only thing not covered in TP. They seemed headed toward the bar, but the street is in the same direction. Any speculations on what exactly it was they were doing?
Posted by Barbi at 3:42 PM No comments: